The show hunts for the best voice under the age 12. The show will be telecasted every Saturday and Sunday at 7 pm.

Vote to save your favorite contestant. Voting ends every Tuesday 12 noon. You have 50 votes per day.

To Vote your favorite contestant follow the below steps,

Steps:
Step 1 : Go to Google (google.co.in) and Type “Super Singer Vote” (or) Go here https://goo.gl/TYv6wz
Step 2 : Click on the “Sign In To Vote” to Login to your Gmail account.
Step-3 : After login, you can choose your favourite contestant to cast your vote. 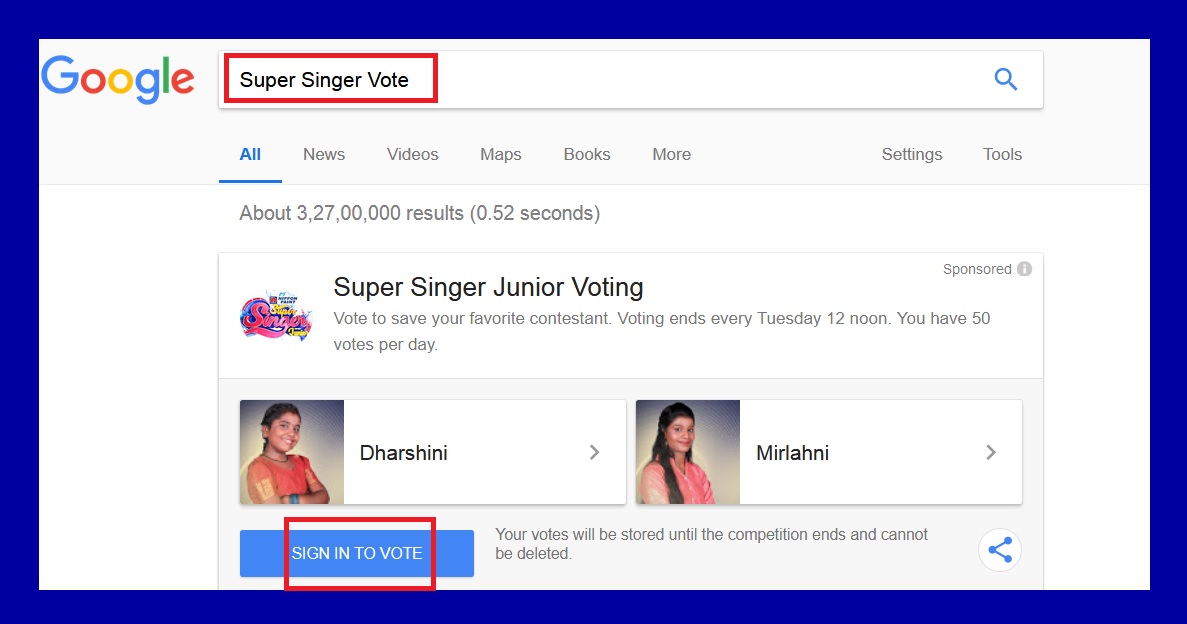 Note :
1. The Viewer can vote only 50 (fifty) times for his Google ID. The Viewer can also split his votes for the Nominated Contestant(s).
2. There is no voting charge in the Google Voting Mechanism.
3. Any unclear/incorrect/incomplete information, including typing wrong characters shall be considered invalid vote.
4. After successful completing of voting the viewers will receive a thank you message.
5. Voting received after the last date will not be considered.

The Judges of the show were the musical sensation Shankar Mahadevan, the melody queen K. S. Chithra, the most popular singers SPB Charan and Kalpana Raghavendar.

1. In the upcoming week of the Program based on the votes generated by the each contest through the Voting Mechanism, 1 contestant getting the lowest Votes shall be eliminated from the Program.
2. The remaining contestant eligible to further participate in the subsequent episodes of the Program.
3. VTPL have the rights to modify the format of the Program, Final Rounds and accordingly the rules for Voting Mechanism at any time.
4. The Voting Mechanism will be announced during the telecast of the Program on the Channel.
5. The viewers can cast their vote to only nominated candidates on the particular week. Suppose the viewers to cast their vote other contestant that will be considered as null or invalid vote.
6. In the event of the day the contestant unable to perform and /or appear in any of the Rounds then the VTPL has the rights to replace such Contestant with a subsequent Contestant.
7. VTPL reserves the right to cancel and/or postpone the Program and /or the Final Rounds and/or extend or alter the Period without assigning any reasons.