You are here: Home > Film/Short Film
All posts from prameyanews7.com

For the 1st time in Odisha, News7 brings a superb platform for budding and veteran passionate film makers to showcase their talent in short film making, win prizes and get recognized through #Showcase2020.

** The competition is open to independent film-makers of Odisha and Beyond.
** Films will be considered for competition only if they are of a total running time of 12 minutes or less.

** To be eligible for competition, submitted film must have been produced not before 1st Jan 2019
** All non-Odia films must be in their original language with Odia subtitles or dubbed in Odia.
** Films already uploaded in Youtube and other public online platforms shall not be accepted.
** The participant must be above 15 years of age.
** Multiple entries are allowed. For every entry, he/she shall submit different forms.
** The entries can be documentaries, short films, animation or experimental art cinema.
** Films once entered cannot be withdrawn.
** The short film must be original with high quality and no watermark of any kind.
** Adult content/Anti Religion/Addiction of Smoking & Alcohol of any kind will not be entertained and would lead to direct disqualification.
** Due credits must be mentioned in the film about their cast and the crew.
** Exceptions to any of the above will be at the discretion of NEWS7 only.

** All films should be submitted either via Google Drive/Wetransfer
** They can also send a DVD/Pendrive to the below mentioned address
** There is no entry fee for this competition.
** Every participant should fill up the form here www.prameyanews7.com/showcase2020/ and send a copy of it along with the DVD/Pendrive
** After sending the film via WETRANSFER/GOOGLE DRIVE/ /CD/DVD, E-mail should be sent to showcase@prameyanews7.com with the Entry Form printout so that we can acknowledge the receipt of the film.

Special Note:
All submitted materials will become the property of NEWS7 for a period of Two Year from the telecast of the Film in the said media platforms.

These materials cannot be returned. By submitting this material and signing the release form, you acknowledge NEWS7’s right to copy any material for the organization’s commercial / non-commercial purpose. 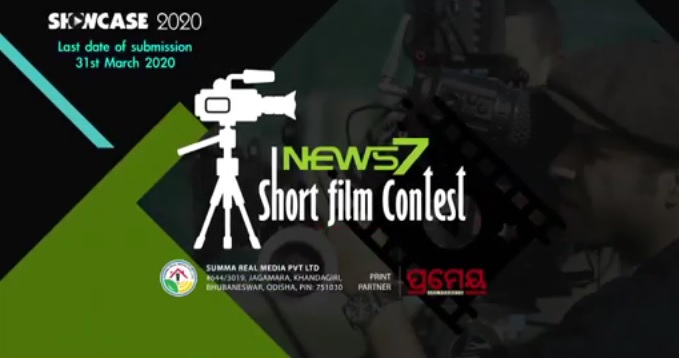 ** Your production may use any video format to capture or create moving images.
** You can also create an animated video or use photographs and captions to create a visual slideshow.
** Whichever format you choose, in the end, it should be original, creative and sends out a message.
** Your final video should be submitted in MP4, MPEG, MOV or WMV formats. Movie should be of 25fps and HD quality.

** Entries will be screened and judged by an independent and non-partial panel comprising film makers, artists, writers and educators.
** Films will be judged entirely on the concept, technical aspects etc. Films will be uploaded on Facebook/Youtube by Team NEWS7 only.
** This will be done just to get a wider spectrum for the movie and the maker.
** Films will be screened on NEW7 Channel with a special program.
** In case of any issues the Judges’ decision is final.

** The top three videos selected by the judging panel will be awarded certificates and cash prizes: First prize – Rs. 50,000; Second prize – Rs. 30,000; Third prize – Rs. 20,000.
** There will be other certificates and cash Prizes for Best Direction, Best Actor, Best Actress, Best Screenplay, Best Story, Best Music, Best Dialogue, Best Cameraman, Best Cinematographer, Most popular on Youtube etc.
** And all these categories will be awarded with Rs. 10,000 in cash
** The top ten films selected by the judging panel will be specially screened to a public audience at the NEWS7 SHOWCASE FILM FESTIVAL at Glittering Function followed by the Showcase Award Show.
** The prize ceremony will be done on the same day.

Screening & Awards:
** The tentative event of NEWS7 SHOWCASE FILM FESTIVAL will be held on the 1st Week of November and all the selected filmmakers will be intimated accordingly.
** Filmmakers of the selected films will be invited to the campus of NEWS7. Accommodation and food will be provided by NEWS7.

In case of any controversy on a matter not mentioned in the above regulations, the Organizers will decide on appropriate action. The Organizers’ word shall be final and binding.