** The cricketer you choose to be your Fantasy Cricket Team’s Captain will receive 2 times the points
** The Vice-Captain will receive 1.5 times the points for his/her performance
** Starting points are assigned to any player on the basis of announcement of his/her inclusion in the team.
** However, in case the player is unable to start the match after being included in the team sheet, he/she will not score any points.
** Points shall however, be applicable (including starting points) to any player who plays as a replacement of such player to whom starting points were initially assigned.
** 11 players from each side play the game
** Strike rate scoring is applicable only for strike rate at or below 70 runs per 100 balls
** None of the events occurring during a Super Over, if any, will be considered for Points to be assigned/applied to a player.
** in case of run-outs involving 3 or more players from the fielding side, points will be awarded only to the last 2 players involved in the run-out.
** Any player scoring a century will only get points for the century and no points will be awarded for half-century.
** Any score over and above century will be eligible for bonus points only for the century.

Points to Remember :
** Your transfer count for a particular matchday will be returned if the matchday is abandoned for any reason
** You must follow the rules of creating a team while making transfers (max. number of overseas players, batsmen, bowlers, etc.) 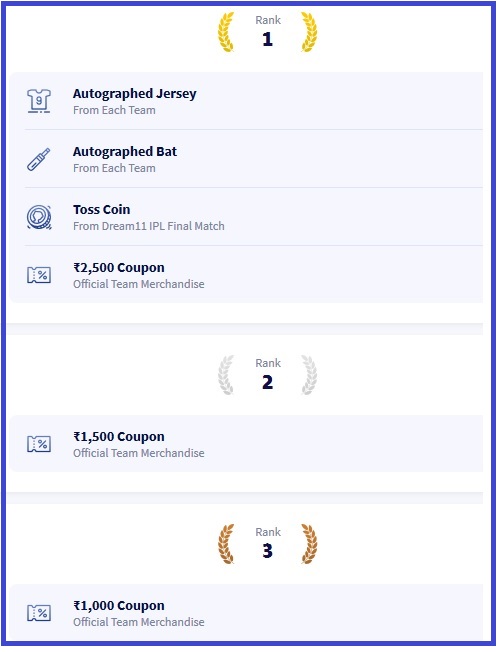 Transfers:
** You have a total of 120 transfers (110 for the the group stage + 10 for the last 4 matches) over the course of the entire tournament
** You can make unlimited transfers before the start of your 1st match and the 1st Qualifier match (after the group stage)
** You can make unlimited Captain & Vice-Captain changes
** Any transfers or Captain/Vice-Captain changes are for all matches in the upcoming matchday