The Sardar Vallabhbhai Patel National Police Academy will hold an all India Annual Essay Competition for the award of the Prime Minister’s Silver Cup.

The Prime Minister’s Silver Cup shall be awarded for the best essay. The topic for the Essay for the year 2021 shall be “Police and Pandemic – Leveraging the Momentum”

** The competition shall be held annually and shall be open to all serving police personnel of any rank including those serving in Central Police Organizations in India and abroad.

** An officer who has won the first prize for two successive years shall not be eligible from taking part in the Competition for a period of three years at a stretch following the year in which the first prize was annexed by him for the second time.

Note :
Essays must be submitted by email / registered post / courier. A letter containing details about the competitor’s name, rank and the official address should also be submitted along with the essay. 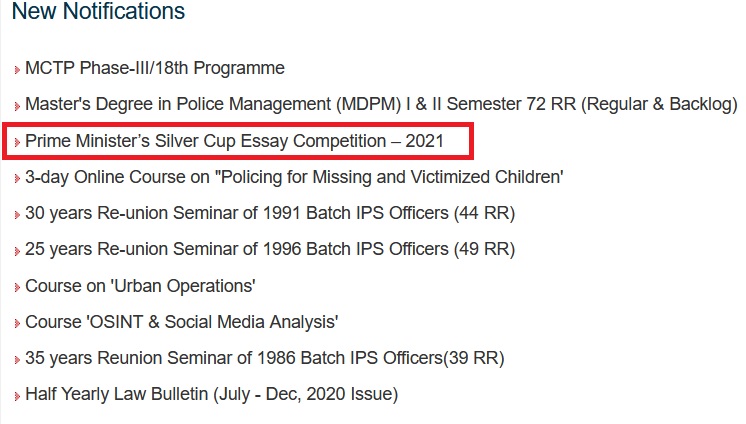 (iii) Essays must not be more than 3500 words in length, must be type written in MS Word (with double spacing, front – Arial, size-12) on only one side of the paper with 1.5 inches margin space on the left hand side and number of words used should be mentioned on each copy of the essay.

(iv) The pages must be serially numbered and securely stapled or clipped together.
(v) Where a reference is made to any published work, the title and the page number must be quoted in a foot-note.

The Committee for the Competition shall consist of the following members to be invited by the Director of Sardar Vallabhbhai Patel National Police Academy
(i) An eminent jurist.
(ii) An eminent educationist.
(iii) An eminent journalist / public man.
(iv) One serving Inspector General of Police.
(v) A nominee of the Prime Minister’s Office.

** The decision of the Committee shall be final. Any essay submitted for the competition and adjudged of sufficient merit and the prize-winning essay may be published by the Director of the Sardar Vallabhbhai Patel National Police Academy and the copyright for such published essays shall vested with the Director. The essays not accepted will not be returned to the competitors.

** The Officer adjudged to have written the best essay will be given a prize money of Rs.10,000/- and a replica of the Silver Cup.

** The essays considered next in order of merit will be awarded Rs.6,000/- and Rs.4,000/- respectively, along with medals and certificates of distinction.

The Cup and the First Prize will be awarded on the occasion of the Annual Passing Out Parade at the Academy.